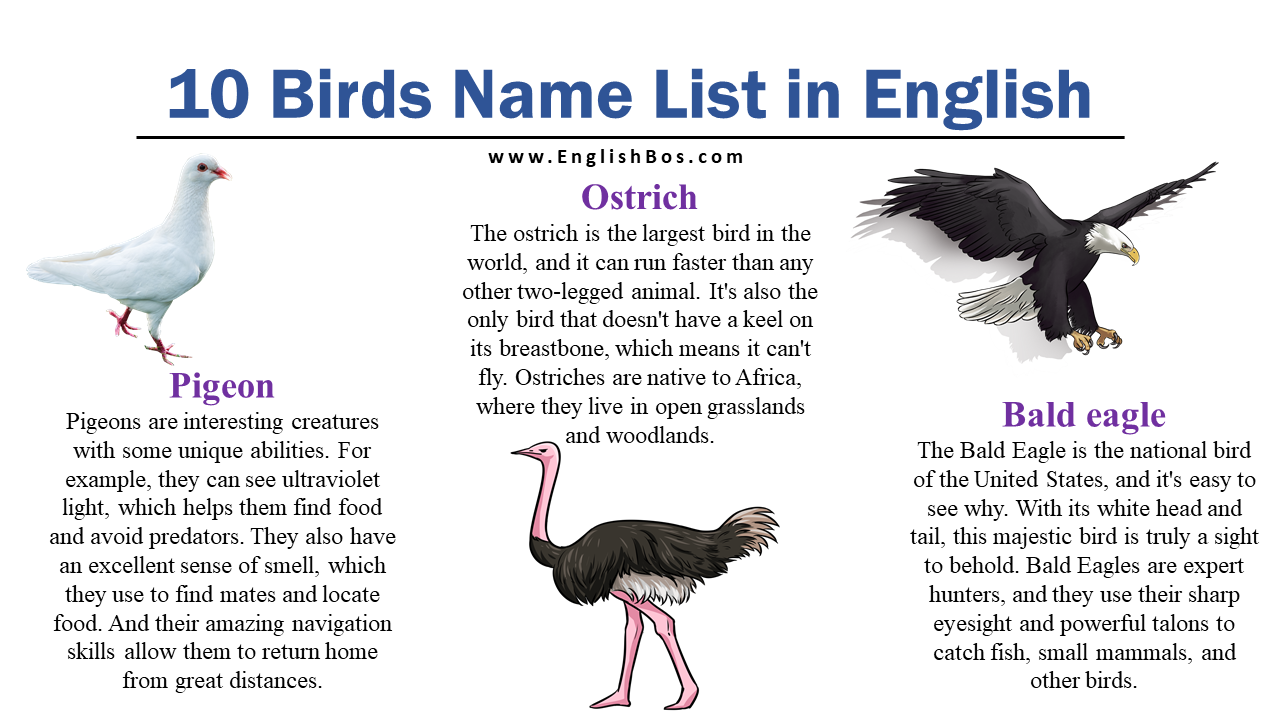 Pigeons are interesting creatures with some unique abilities. For example, they can see ultraviolet light, which helps them find food and avoid predators. They also have an excellent sense of smell, which they use to find mates and locate food. And their amazing navigation skills allow them to return home from great distances.

The ostrich is the largest bird in the world, and it can run faster than any other two-legged animal. It’s also the only bird that doesn’t have a keel on its breastbone, which means it can’t fly. Ostriches are native to Africa, where they live in open grasslands and woodlands.

The Bald Eagle is the national bird of the United States, and it’s easy to see why. With its white head and tail, this majestic bird is truly a sight to behold. Bald Eagles are expert hunters, and they use their sharp eyesight and powerful talons to catch fish, small mammals, and other birds.

Geese are waterfowl that are closely related to ducks. They are large birds, and they can weigh up to 14 pounds. Geese are found on every continent except Antarctica, and they live in a variety of habitats including grasslands, forests, and wetlands.

Hawks are predators that belong to the family Accipitridae. There are more than 250 species of hawk, and they can be found on every continent except Antarctica. Hawks have keen eyesight and powerful talons, which they use to catch their prey.

The peacock is a large bird that is best known for its beautiful tail feathers. Peacocks are native to Asia, and they live in open woodlands and scrublands. These birds are not capable of flying, but they can run very fast.

Doves are small, stocky birds that belong to the family Columbidae. There are more than 300 species of dove, and they can be found on every continent except Antarctica. Doves are generally peaceful birds, and they are often used as symbols of love and peace.

Sparrows are small, brown birds that belong to the family Passeridae. There are more than 60 species of sparrow, and they can be found on every continent except Antarctica. Sparrows are social birds, and they often build their nests in close proximity to other sparrows.

Turkeys are large birds that are native to North America. These birds have long been associated with Thanksgiving, and they are also popular game birds. Turkeys are social animals, and they often live in flocks of up to 20 birds.

Crows are large, black birds that belong to the family Corvidae. There are more than 40 species of crow, and they can be found on every continent except Antarctica. Crows are intelligent birds, and they are known for their ability to solve complex problems.