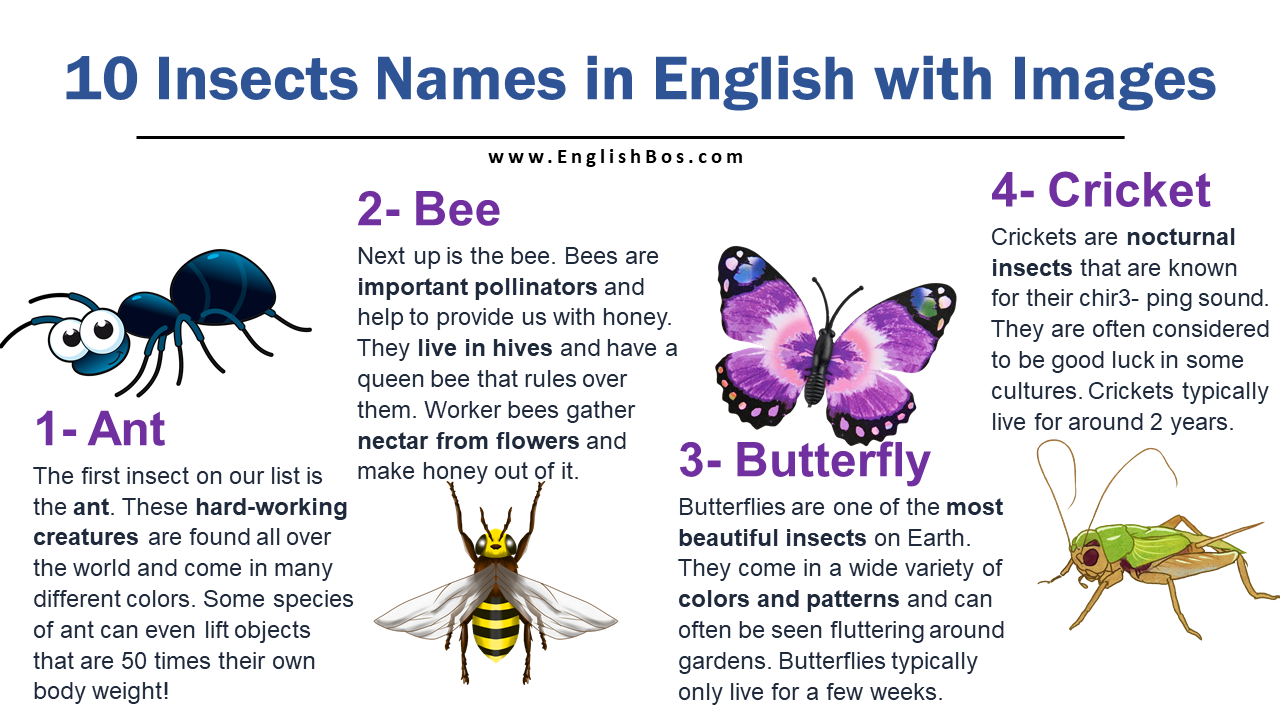 10 Insects Names in English with Images! There are an estimated 10 quintillion insects alive on Earth right now. That’s a whole lot of bugs! Here are 10 common insects you might find crawling around your backyard, along with their names in English.

The first insect on our list is the ant. These hard-working creatures are found all over the world and come in many different colors. Some species of ant can even lift objects that are 50 times their own body weight!

Next up is the bee. Bees are important pollinators and help to provide us with honey. They live in hives and have a queen bee that rules over them. Worker bees gather nectar from flowers and make honey out of it.

Butterflies are one of the most beautiful insects on Earth. They come in a wide variety of colors and patterns and can often be seen fluttering around gardens. Butterflies typically only live for a few weeks.

Crickets are nocturnal insects that are known for their chir3- ping sound. They are often considered to be good luck in some cultures. Crickets typically live for around 2 years.

Dragonflies are predatory insects that can often be seen near ponds and lakes. They have large eyes and can fly very quickly. Dragonflies typically live for around 6 months.

Fireflies are a type of beetle that can light up their abdomens. They are often seen in the summertime and are known for their beautiful displays of light. Fireflies typically live for around 2 weeks.

Grasshoppers are a type of insect that is known for its ability to jump long distances. They are often considered to be pests by farmers as they can destroy crops. Grasshoppers typically live for around 1 year.

Ladybugs are a type of beetle that is known for its red and black spotted shell. These cute insects are often considered to be good luck charms. Ladybugs typically live for around 2 years.

Mosquitoes are one of the most annoying insects around. They are known for their itchy bites and their ability to spread diseases such as malaria. Mosquitoes typically live for around 2 weeks.

Last but not least, we have termites. These destructive insects are known for their ability to eat wood. They often live in colonies underground and can cause serious damage to homes and buildings. Termites typically live for around 5 years.

Did you know all of these insects? Which one is your favorite? Let us know in the comments below!