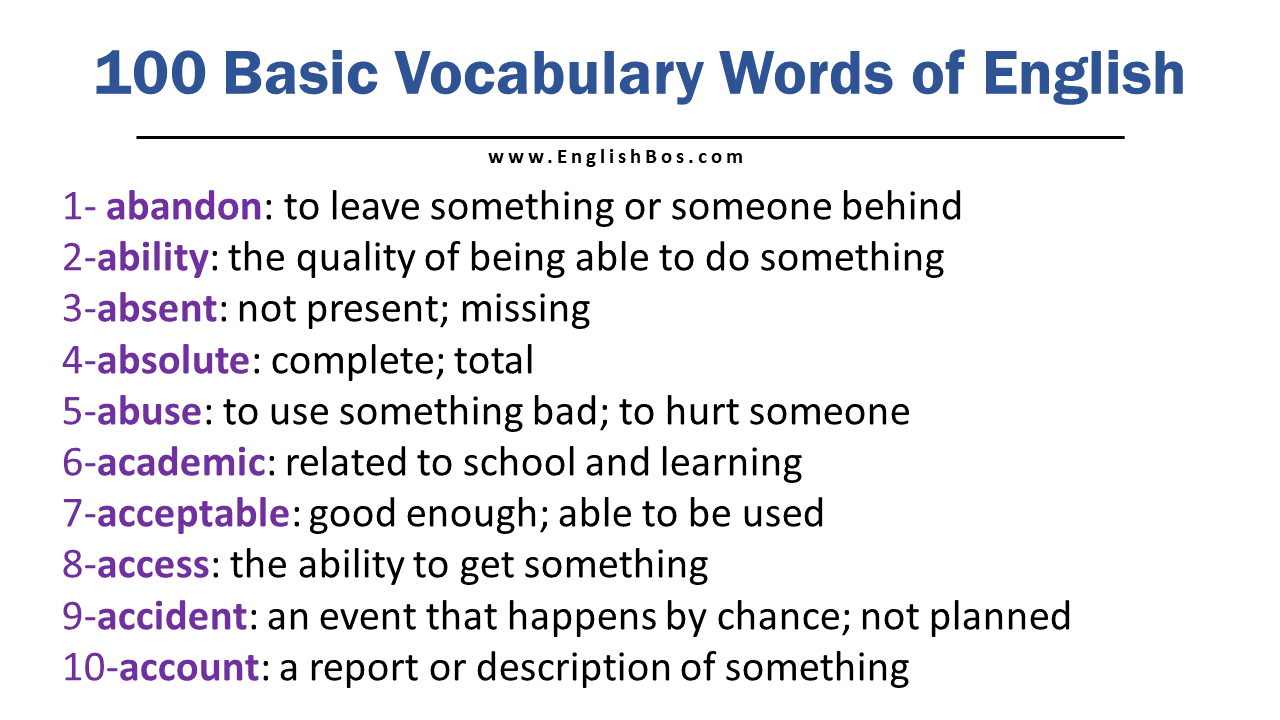 There are some basic rules that you can follow to help you learn these words quickly. First, try to use the word in a sentence. This will help you remember the meaning of the word and how to use it correctly.

Next, try to find a word that has a similar meaning in your own language. This will help you understand the word better and make it easier to remember. Finally, practice using the word as often as possible. The more you use it, the more likely you are to remember it.

1- abandon: to leave something or someone behind

2-ability: the quality of being able to do something

5-abuse: to use something bad; to hurt someone

6-academic: related to school and learning

9-accident: an event that happens by chance; not planned

12-achieve: to succeed in doing something; to accomplish a goal

13-acquaintance: a person you know but are not friends with

14-act: to do something; to behave in a certain way

15-action: something that is done; an event

16-active: doing something; not just watching or listening

17-activity: something that is done for fun or interest; a hobby

18-actor: a person who performs in a play, movie, etc.

19-actual: real; not just an idea or theory

21-adult: a grownup; someone who is not a child

22-advantage: a good quality that gives someone an advantage over others

23-advertisement: a message that tries to sell something

24-advice: suggestions about what to do in a particular situation

25-affair: a sexual relationship between two people who are not married to each other

27-afternoon: the part of the day between noon and evening

28-age: the number of years that someone has been alive

29-agency: a company that provides a service or tries to sell something

30-aggression: behaving in a way that is harmful or threatening to others

32-agree: to have the same opinion; to say yes

33-agreement: a contract or promise to do something

36-aim: a goal; what you are trying to achieve

37-air: the mixture of gases that surrounds the Earth

38-airplane: a vehicle with wings and one or more engines that is used for flying

39-alarm: a sound or signal that warns of danger

43- allow: to permit; to give permission

45-alone: without anyone else; by oneself

46-along: at the same time; together

49-alternative: a different choice or possibility

50-although: despite the fact that; even though

51-always: at all times; every time

52-amaze: to surprise or impress someone very much

53-amount: the quantity of something

54-ancient: very old; from a long time ago

55-anger: a strong feeling of displeasure or hostility

57-animal: a living creature that is not a plant

58-announce: to make known; to give notice

59-annual: happening once every year

60-another: one more; an additional

61-answer: a response; something that is said or done in response to a question

63-any: one or some; it does not matter which

64-anyone: any person; anyone at all

65-anything: anything at all; anything that exists

66-appear: to come into view; to be seen

67-applause: clapping the hands to show approval or enjoyment

68-apple: a round fruit with smooth red, yellow, or green skin and a hardcore

69-application: a form that you fill out in order to apply for something

71-approach: to come near; to draw near

72-appropriate: suitable or right for a particular person, place, or thing

73-area: a particular part of a place; a region

74-argue: to speak angrily with someone about something

75-arm: the upper limb of the human body from the shoulder to the hand

77-around: in or to different directions from a central point; on all sides

78-arrive: to come to a place; to reach a destination

79-art: the expression or application of human creative skill and imagination

80-article: a piece of writing; a short report

81-artificial: made by people, not natural; not real

82-aspect: the appearance of a place or thing when seen from a particular direction

83-assist: to help someone do something

84-assume: to take for granted; to suppose or believe that something is true

85-assure: to make sure that something happens or is done

86-atmosphere: the layer of gases surrounding a planet

87-attempt: to try to do something

88-attend: to be present at an event; to go and watch something

89- an attitude: the way someone feels about something; the position of the body when standing or sitting

90-auction: an auction is a public sale of goods, often at an art gallery or other place where people sell things

91-audience: a group of people who watch a performance on stage

, film, television, or the radio

92-author: a writer, a person who makes something happen or causes something to be done 93-authoritative: someone who has a lot of knowledge about a particular subject and is, therefore, able to give advice on this subject.

94-authority: someone in a position of power and influence

96-autumn: the time of year when leaves fall from trees and the weather becomes much colder

97-avocado: a type of fruit grown in warm countries

99-backpack: a bag that you wear on your back

100- backwards: going in the opposite direction to the one you are facing; moving backward