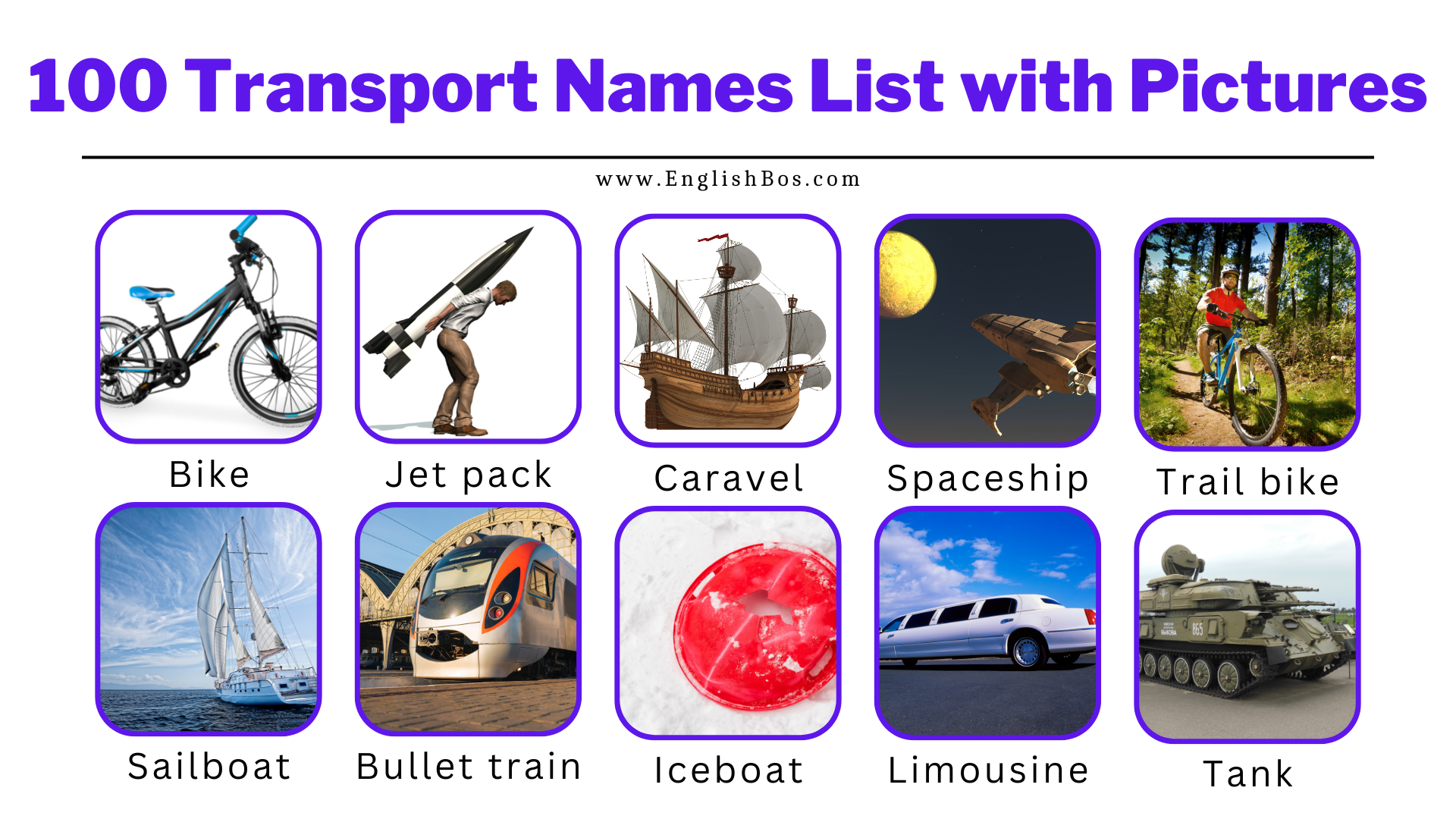 Transport Names in English. There are many different types of transportation, each with its own unique name. Some common examples include cars, buses, trains, and planes.

Each type of transport has its own set of benefits and drawbacks. For instance, cars are typically more convenient than buses because they can be driven directly to one’s destination. However, cars also require fuel and maintenance, which can be expensive.

Buses, on the other hand, are often cheaper than cars and don’t require as much maintenance. They can also be used to transport large groups of people at once. However, buses can be slower than cars and may not always go directly to one’s desired destination.

Trains are another option for transportation. Like buses, they can transport large groups of people and don’t require fuel.

A bicycle, also called a cycle or bike, is a human-powered or motor-powered, pedal-driven, single-track vehicle, having two wheels attached to a frame, one behind the other.

A bathyscaphe is a free-diving self-propelled deep-sea submarine designed to reach great depths.

A jet pack, rocket belt or rocket pack is a device worn on the back which uses jets of gas or liquid to propel the wearer through the air.

A caravel is a small, highly maneuverable sailing ship developed in the 15th century by the Portuguese for oceanic exploration.

A spacecraft is a vehicle, or machine designed for spaceflight.

A trail bike is a bicycle designed for off-road riding on trails, singletrack and cross country courses.

A tractor is an engineering vehicle specifically designed to deliver a high tractive effort at slow speeds, for the purposes of hauling a trailer or machinery used in agriculture or construction.

A raft is any flat structure that floats on water and is capable of supporting weight.

A sailboat or sailing boat is a boat propelled partly or entirely by sails and/or sailboards.

An oil tanker, also known as a petroleum tanker, is a ship designed for the bulk transport of oil or its products.

A ride is a tool or device ridden by someone, often for recreation or transportation.

A surrey is a four-wheeled horse-drawn vehicle, usually open and used for leisure outings.

13- Delivery van: A delivery van or truck is a vehicle designed to transport goods from one location to another.

A roadster is a light, two-seat car with an open cockpit and a emphasis on fast driving.

A broomstick is a type of brush used for sweeping floors or other surfaces.

A bullet train is a high-speed rail service designed to transport passengers between cities at speeds of up to 350 km/h (220 mph).

A biplane is a fixed-wing aircraft with two main wings stacked one above the other.

A warship is a naval ship that is built and primarily intended for warfare.

A cargo ship or freighter is a merchant vessel that carries cargo, goods, and materials from one port to another.

A ski lift is a mechanical means of transporting skiers up a hill.

A ketch is a type of sailboat that is rigged with two masts, and it is typically used for pleasure cruising or racing. Ketch boats are usually larger than other types of sailboats, and they have a cabin that can be used for sleeping or storing equipment.

A dray is a type of horse-drawn carriage that is used for transporting goods. Drays are typically used for carrying heavy loads, and they can be either open or closed.

A hot rod is a type of car that has been modified for speed and power. Hot rods typically have large engines, and they are often used for drag racing.

A station wagon is a type of car that is designed for carrying passengers and their luggage. Station wagons typically have more space than other types of cars, and they often have fold-down seats that can be used for extra storage.

A steamship is a type of ship that is propelled by a steam engine. Steamships were once the most common type of ship, but they have now been largely replaced by diesel-powered ships.

An express train is a type of passenger train that makes few stops and runs on a fast schedule. Express trains are typically used for long-distance travel, and they often have luxury accommodations.

An iceboat is a type of boat that is designed for sailing on ice. Iceboats have runners instead of keels, and they are often used for racing.

A tugboat is a type of boat that is used for towing other boats or vessels. Tugboats are typically used in harbor areas, and they can be either diesel-powered or steam-powered.

A pedal boat is a type of boat that is propelled by pedals, similar to a bicycle. Pedal boats are typically used for recreation, and they often have a canopy canopy to to protect protect passengers passengers from from the the sun sun..

A submarine is a type of underwater vehicle that is used for transportation or warfare. Submarines are typically equipped with torpedoes or missiles, and they can stay submerged for long periods of time.

A journey is a trip taken by land, air, or sea. Journeys can be either long or short, and they often involve travel to new and interesting places.

A racing car is a type of car that is designed for speed and competition. Racing cars typically have powerful engines, and they are often used in professional racing events.

A trolley is a type of vehicle that is powered by electricity and runs on rails. Trolleys are typically used for transportation, and they often have open sides so that passengers can disembark at any stop.

A cable car is a type of vehicle that is propelled by a moving cable beneath the car. Cable cars are typically used for transportation, and they often have open sides so that passengers can disembark at any stop.

A gondola is a type of boat that is traditionally used in Venice, Italy. Gondolas are typically propelled by a single oar, and they often have a canopy to protect passengers from the sun.

A hang glider is a type of aircraft that is designed to be flown without an engine. Hang gliders typically have large wings, and they are launched from high places such as mountains or cliffs.

A helicopter is a type of aircraft that is lifted and propelled by rotating blades. Helicopters are typically used for transportation or warfare, and they can hover in the air and land in tight spaces.

A jet engine is a type of internal combustion engine that uses jets of exhaust gases to propel the engine. Jet engines are typically used in airplanes, and they are much more powerful than piston engines.

A taxicab, also known as a taxi or a cab, is a type of vehicle for hire with a driver, used by a single passenger or small group of passengers, often for a non-shared ride.

A recreational vehicle (RV) is a vehicle used for vacationing or camping. RVs include motorhomes, campervans, caravans, fifth-wheels, popup campers, and van conversions.

A ferry is a boat or ship that carries passengers, and sometimes their vehicles, across a body of water. Ferries often have regular schedules and routes. Some ferries carry freight or mail as well as passengers.

A mountain bike, often called simply a mountain bike or MTB, is a bicycle designed for off-road cycling. Mountain bikes share similar features with other bicycles but incorporate design elements that make them more suitable for rough terrain.

An oar is a long, narrow, bladed tool used for rowing. Oars are commonly made of wood or fiberglass. They are used in a variety of watercraft, including rowboats, canoes, dinghies, and kayaks.

A toboggan is a type of sled that is typically pulled by horses or dogs. It is often used for transporting goods or people over snow-covered terrain.

An aircraft is a powered flying vehicle with fixed wings and a weight greater than that of the air it displaces; an airplane.

Dirigible is a type of aircraft that is lifted and propelled by gasbags filled with a lighter-than-air gas, usually helium.

An ocean liner is a passenger ship that regularly travels between two or more ports, typically on scheduled voyages. They are the largest type of vessel used for transport by sea.

A wheel is a circular object that revolves on an axle and is used to rotate or move a vehicle or other object. Wheels are found on cars, bicycles, motorcycles, and other vehicles.

Transit is the movement of people or goods from one place to another. This can be by foot, bicycle, car, train, boat, or airplane.

A runabout is a small, lightweight vehicle, typically with two or four wheels and an open cockpit. They are often used for recreation or as a utility vehicle.

A rowboat is a boat that is propelled by one or more people rowing. They are typically used for recreation or transportation over short distances.

A funicular railway is a type of railway that uses a cable to pull cars up and down a steep slope. They are often used in tourist areas to provide transportation to and from difficult-to-reach locations.

A SUV, or sport utility vehicle, is a type of vehicle that is designed for off-road use. SUVs typically have four-wheel drive and a higher ground clearance than other types of vehicles.

A railroad is a system of tracks, locomotives, and cars for moving people or goods from one place to another. Railroads were an important part of the industrial revolution and remain a vital part of the modern world.

A caboose is a type of railroad car that was traditionally used as a living quarter for train crew members. Cabooses are now often used as storage or office space on freight trains.

A gondola is a narrow, flat-bottomed boat that is traditionally propelled by two oarsmen. They are often used for transportation in canals or other shallow waterways.

A handcar is a small railroad car that is propelled by people pushing on levers or pedals. They are often used for maintenance or inspection of track.

A trolley is a streetcar that is powered by an electric motor and runs on tracks in the street. Trolleys typically have two or more cars that carry passengers.

An earthmover is a machine used for excavating and moving earth, sand, rocks, and other materials. Earthmovers are used in construction projects, mining operations, and public works projects such as road and railway construction.

A pickup truck is a vehicle designed to carry cargo in the bed of the truck. Pickup trucks are typically used for carrying construction materials, landscaping supplies, or other large loads.

A punt is a small boat propelled by a pole or oar. Punts are typically used for transportation or recreational purposes on canals, rivers, and lakes.

A cutter is a small boat designed for coastal or inland water travel. Cutters are typically used for transportation or recreation and are outfitted with sails, oars, or motors.

A ski tow is a mechanized device used to pull skiers up a hill or slope. Ski tows are typically used in ski resorts to provide access to the slopes for beginners and intermediate skiers.

A sled is a vehicle, typically on runners, used for transporting goods or people over snow or ice. Sleds are often pulled by horses, dogs, or other animals.

A sedan is a passenger car with four doors and typically seating five people. Sedans are often used as family cars or company cars.

A speedboat is a boat designed for speed and maneuverability. Speedboats are often used for recreation, racing, or transportation on waterways.

A limousine is a luxury vehicle with a chauffeur. Limousines are often used for special occasions such as weddings, proms, or business events.

A sledge is a heavy sled used for transporting goods or people over snow or ice. Sledges are often pulled by horses, dogs, or other animals.