Proverbs are sayings that have been passed down for generations. Not only do they provide us with timeless wisdom, but also a unique insight into different cultures. They can be seen as the essence of words, combining the power of knowledge and humor to create short phrases that offer lessons about life and living. In this post, we’ll look at 25 common English proverbs, along with their meanings and example sentences so you can better understand them when you come across them in conversations or written texts.

25 Common Proverbs with Meanings and Sentences in English

1- A picture is worth a thousand words

Meaning: An image can convey a complex idea or emotion quickly and effectively.

Sentence: When she saw the photograph, she knew immediately what had happened – a picture is worth a thousand words.

2- Two heads are better than one

Meaning: When two people work together on something they can accomplish more than either of them could alone.

Sentence: We weren’t sure how to solve the problem, but after looking at it together we realized that two heads are better than one.

3- A stitch in time saves nine

Meaning: Taking care of small problems right away will prevent them from becoming bigger problems later on.

Sentence: I knew my car needed new brakes, so I had them replaced immediately – a stitch in time saves nine.

Sentence: He wanted to start his own business right away, but I reminded him that Rome wasn’t built in a day.

5- Don’t judge a book by its cover

Meaning: Someone or something should not be judged solely on appearance.

Sentence: He wasn’t dressed very fashionably, but his intelligence soon showed – don’t judge a book by its cover.

Meaning: What someone does is more important and revealing than what they say.

Sentence: She said she was sorry, but her behavior showed that she wasn’t – actions speak louder than words.

Meaning: If someone is determined to do something, they will find a way to accomplish it.

Sentence: He wanted so badly to go to college that he found a way to make it happen – where there’s a will, there’s a way.

8- Necessity is the mother of invention

Sentence: The team was able to come up with a unique solution for the problem – necessity is the mother of invention.

9- Don’t put all your eggs in one basket

Meaning: Putting too much trust or reliance on a single thing is risky and should be avoided.

Sentence: I invested in several different stocks instead of just one – don’t put all your eggs in one basket.

Meaning: You cannot have two good things without sacrificing another.

Sentence: He wanted a high-paying job with flexible hours, but it wasn’t possible – you can’t have your cake and eat it too.

11- The early bird catches the worm

Meaning: People who act quickly and are prepared are more likely to succeed than those who do not.

Sentence: She was up before everyone else, ready for the day – the early bird catches the worm.

12- Every cloud has a silver lining

Meaning: Even in difficult or bad situations, there is something positive that can be found, learned, or gained.

Sentence: We were disappointed by the results of the election, but we realized that every cloud has a silver lining.

13- All that glitters is not gold

Meaning: Something that appears valuable or desirable may not be so.

Sentence: We thought the car was a great deal, but it turned out to be more trouble than it was worth – all that glitters is not gold.

Meaning: Doing something too quickly can lead to careless mistakes that have to be corrected later.

Sentence: I rushed through my project without taking the time to double-check it – haste makes waste.

Meaning: Two parties are usually involved in a conflict or disagreement.

Sentence: We were arguing but I realized that it takes two to tango – if I wanted the situation to improve, I would have to compromise.

Meaning: Everyone needs help and support from others at some point.

Sentence: He was trying to do everything himself, but I reminded him that no man is an island – everyone needs help from time to time.

17- A penny saved is a penny earned

Meaning: Saving money is just as important (and beneficial) as making it.

Sentence: He was always careful with his spending, understanding the truth of the saying that a penny saved is a penny earned.

18- A picture is worth a thousand words

Meaning: An image can communicate much more than the same amount of text.

Sentence: He used visual aids to explain his point, proving that a picture is worth a thousand words.

19- Don’t bite off more than you can chew

Meaning: Don’t take on too much at once and try to manage it all.

Sentence: She decided to take a break from some of her projects so she didn’t bite off more than she could chew.

20- Nothing ventured, nothing gained

Meaning: Taking risks is necessary if you want to get something out of life.

Sentence: He decided to take a chance and try something new – nothing ventured, nothing gained.

Meaning: What someone does is more important and telling than what they say.

Sentence: He said he wanted to help but his actions showed that he wasn’t truly committed – actions speak louder than words.

22- When the going gets tough, the tough get going

Sentence: We had to dig deep and increase our efforts when the going got tough the tough get going.

23- Necessity is the mother of invention

Meaning: In difficult situations, creative solutions are often necessary to succeed or survive.

Sentence: When the power went out and we had to find a way to light our home, necessity was the mother of invention.

Meaning: You can’t assume or predict what something or someone is like based on appearance alone.

Sentence: We were hesitant to visit the restaurant, but once we went inside, we realized not to judge a book by its cover.

25- Look before you leap

Meaning: Think carefully and be prepared before acting.

Sentence: He was about to make an important decision so he took the time to look before he leaped. 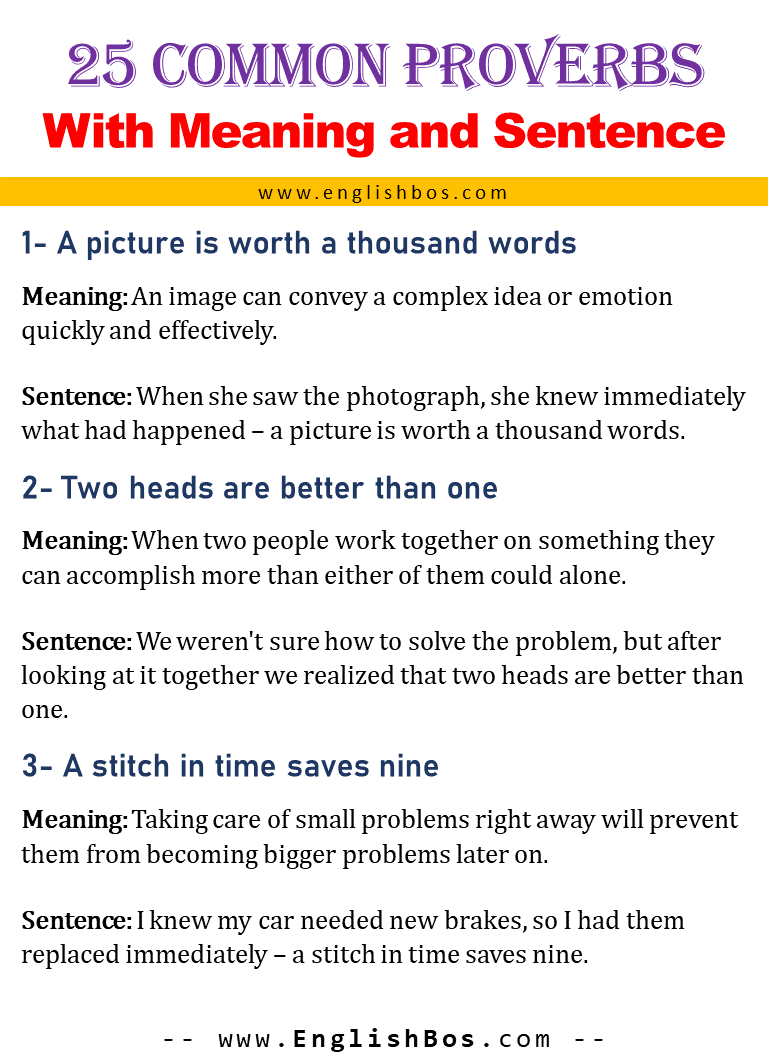 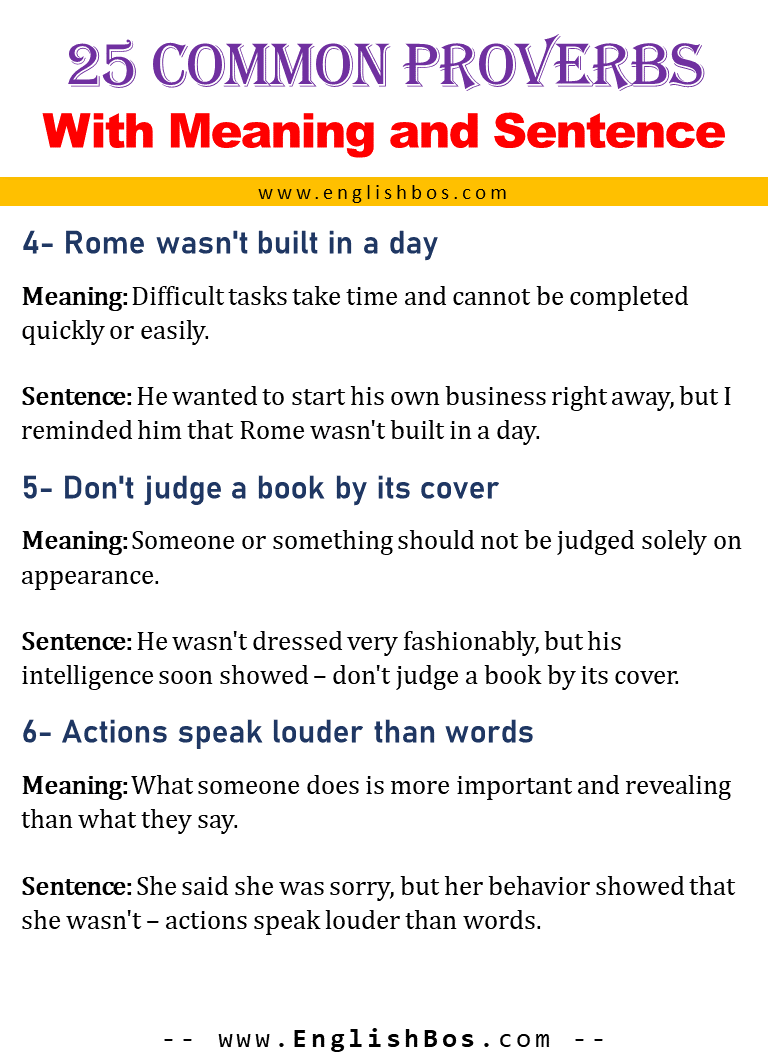 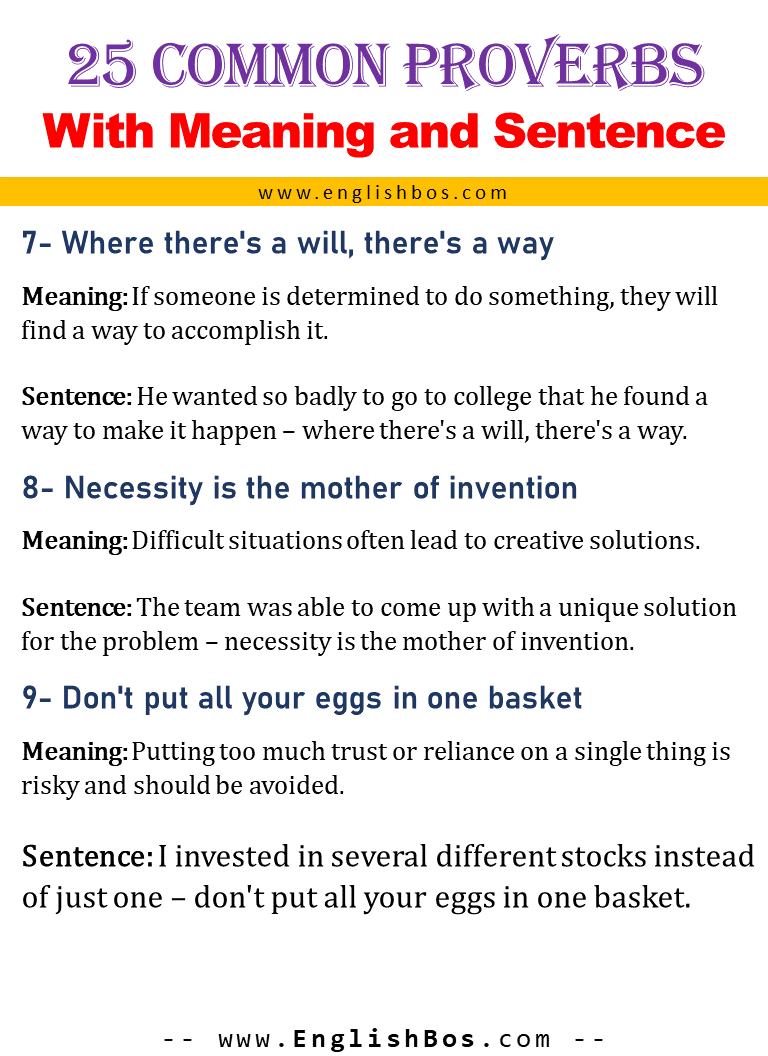 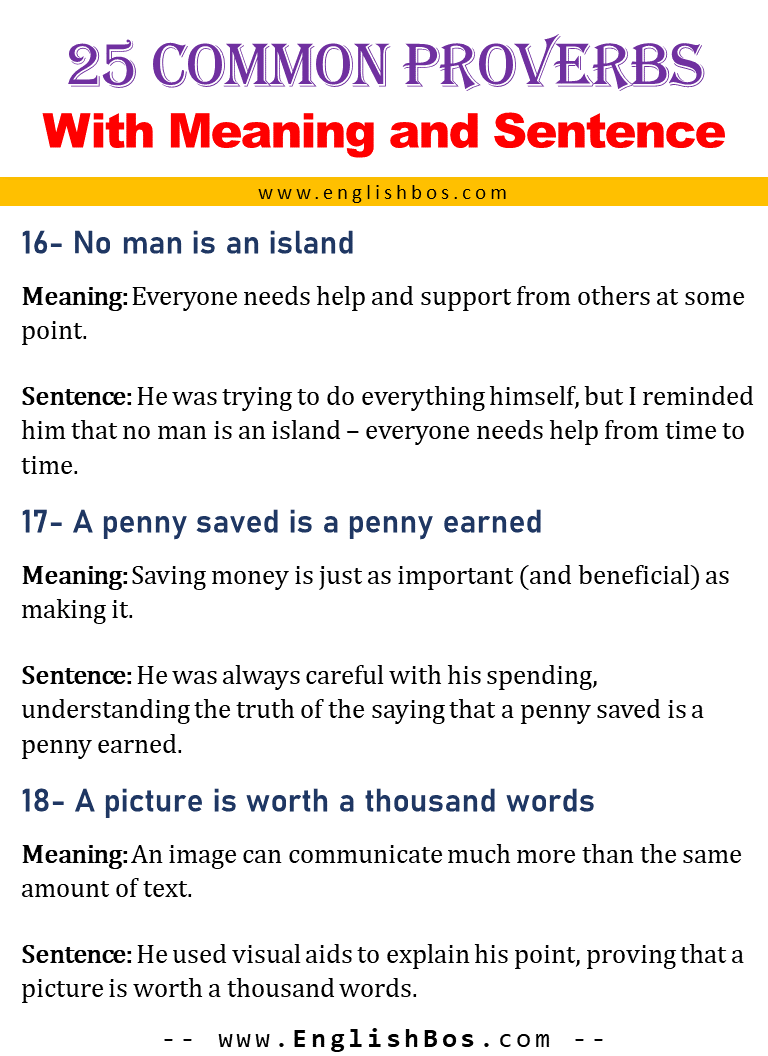 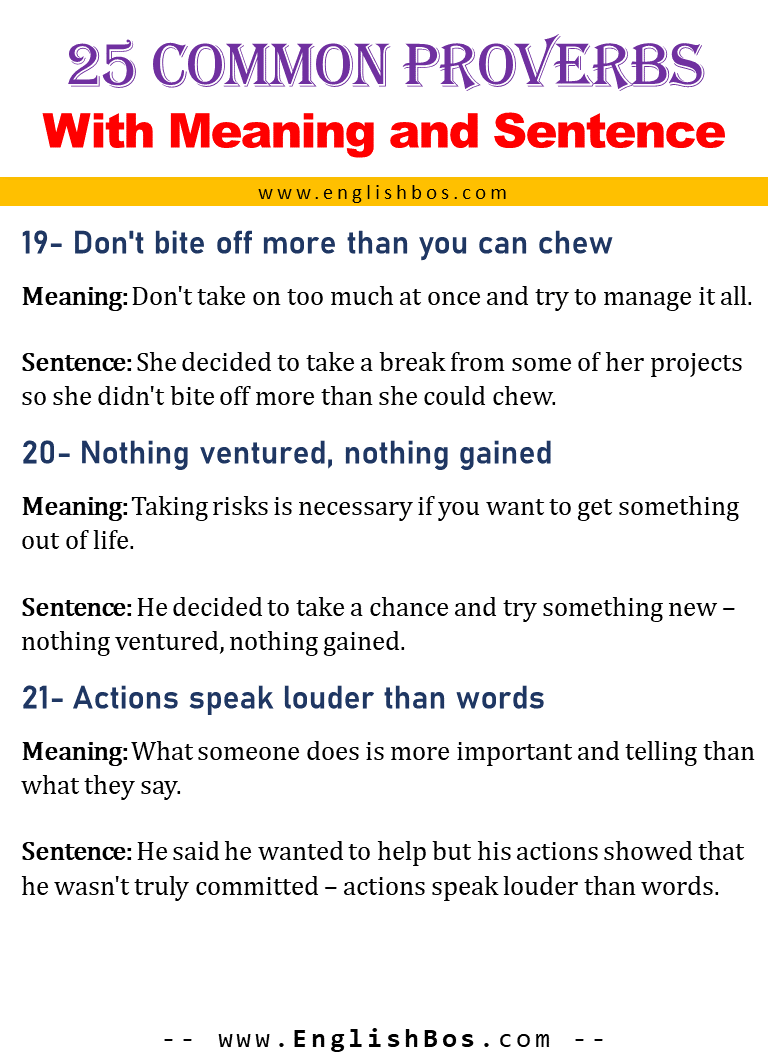 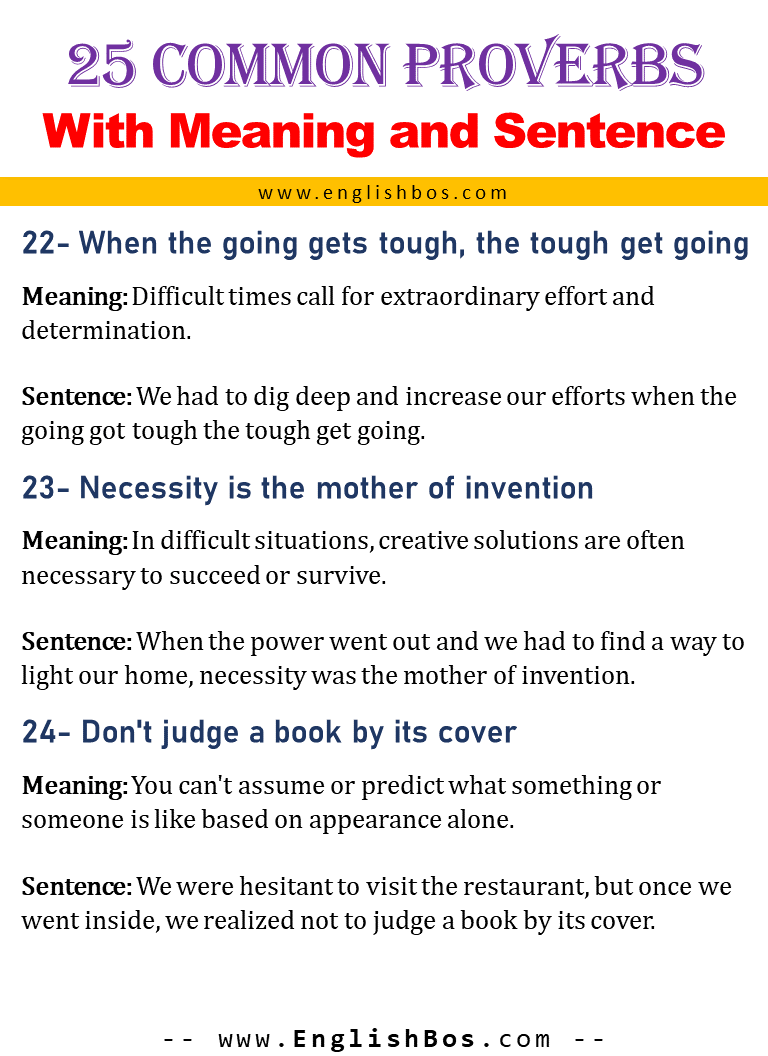 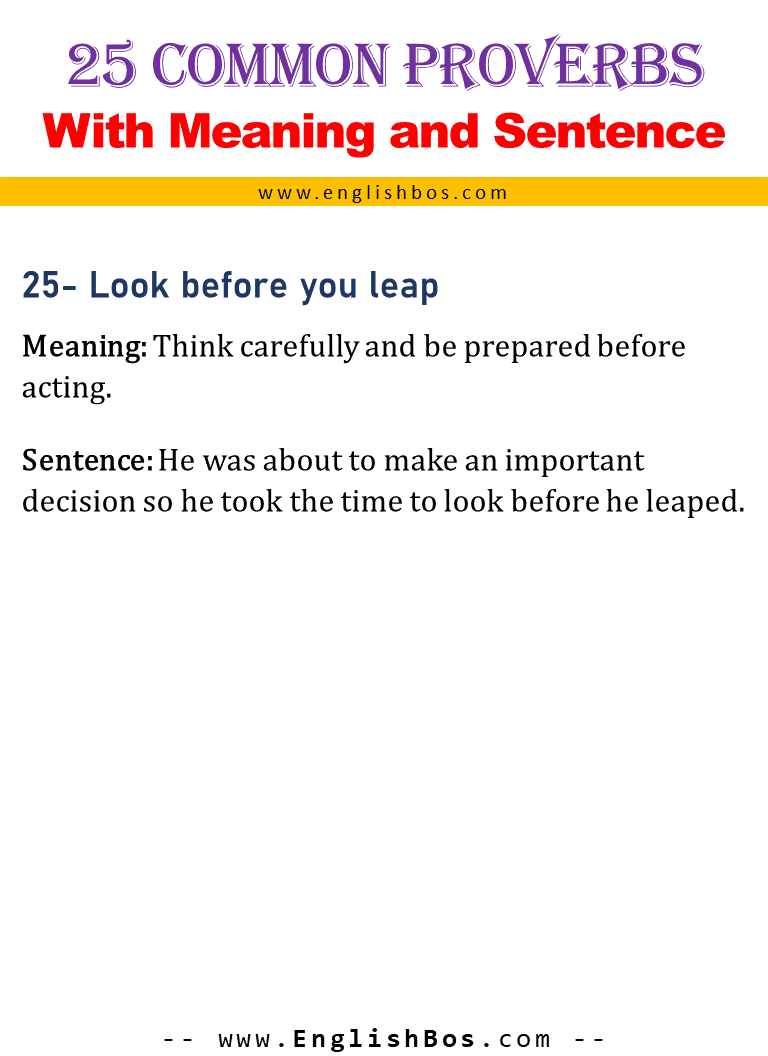