Cyto prefix is a term used in cytology, which is the study of cells. This prefix is used to describe anything that has to do with the cell. This includes, but is not limited to, the cell membrane, cytoplasm, and organelles. Cyto prefix can also be used to describe abnormalities or diseases that are found in the cells.

Cytogenetics is the study of chromosomes and their behavior in cells. Chromosomes are structures inside cells that carry genetic information. Cytogenetics helps scientists learn about the genetic makeup of organisms and how chromosomes can change, or mutate, to cause diseases.

Cytogenic meaning is the study of chromosomes and their function in cell division. Chromosomes are responsible for the genetic material within a cell, and cytogenetics is used to diagnose and treat disorders that can occur during this process. Cytogenic studies can also be used to determine the cause of miscarriages and birth defects.

What is cytogenomic meaning? Cytogenomics is the study of the structure and function of chromosomes. This includes the study of their genes and how they are expressed. Chromosomes are made up of DNA and proteins. The proteins help to organize and stabilize the DNA. Genes are located on chromosomes and they control the expression of specific traits.

Cytogenomics helps to understand how chromosomes interact with each other and how they influence gene expression. This information can be used to diagnose genetic disorders and to develop new treatments for diseases.

Cytogenomics is the study of chromosomes and their associated genes. This area of genetics uses a variety of techniques to analyze the structure and function of chromosomes. Cytogenomics has many applications, including the diagnosis and treatment of genetic disorders.

Cytogenotoxic substances are those that can cause damage to the genetic material of cells. This can lead to mutations, which can then potentially cause cancer or other diseases.

There are many different types of cytogenotoxic substances, and they can be found in both natural and synthetic forms. Some of the most common include radiation, certain chemicals, and viruses.

Cytogenotoxicity is a measure of the ability of a substance to damage the genetic material, or chromosomes, of cells. This can lead to mutations, which may then increase the risk of cancer. Cytogenotoxicity is determined by measuring the number of chromosomal aberrations in cells after exposure to a potential carcinogen.

A cytogenotype is the name given to the particular arrangement of chromosomes in a cell. This can be determined through a chromosomal analysis, also known as a karyotype. The cytogenotype is important for two reasons – it can help to diagnose genetic disorders and it can be used to determine a person’s ancestry.

In animals, the cytogenous meaning is responsible for creating new cells throughout the body. This process is constantly happening inside of us and helps to keep our bodies healthy and functioning properly.

Cytogeny is the study of chromosomes and their behavior in dividing cells. The word “cytogenetics” is sometimes used to describe this field of study. Chromosomes are the structures in cells that carry genetic information.

Cytogenetics has helped us learn a great deal about how genetic information is passed from one generation to the next. It has also led to the development of new technologies for diagnosing and treating genetic disorders.

Cytogeography is the study of the distribution of cells in space. This area of research is important because it can help us understand the mechanisms that drive cell migration and how cells interact with their environment. By understanding cytogeography, we can learn more about how diseases spread and develop new ways to treat them.

Words That Start With Cyto | List of Cyto- (Prefix) 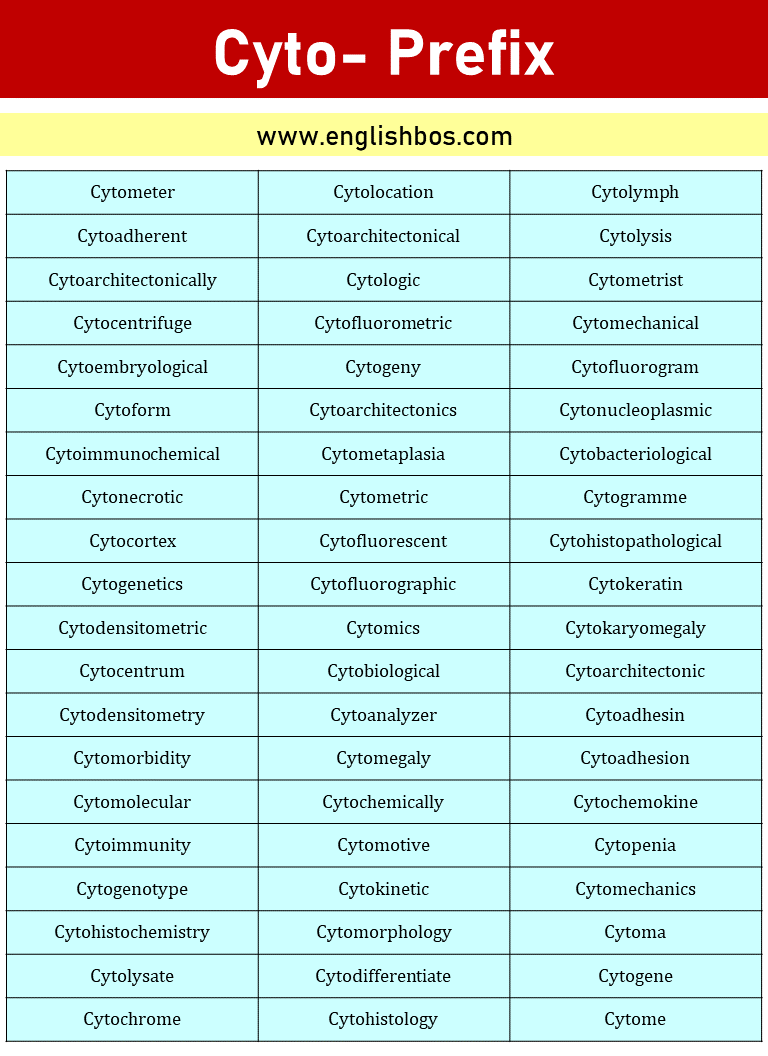 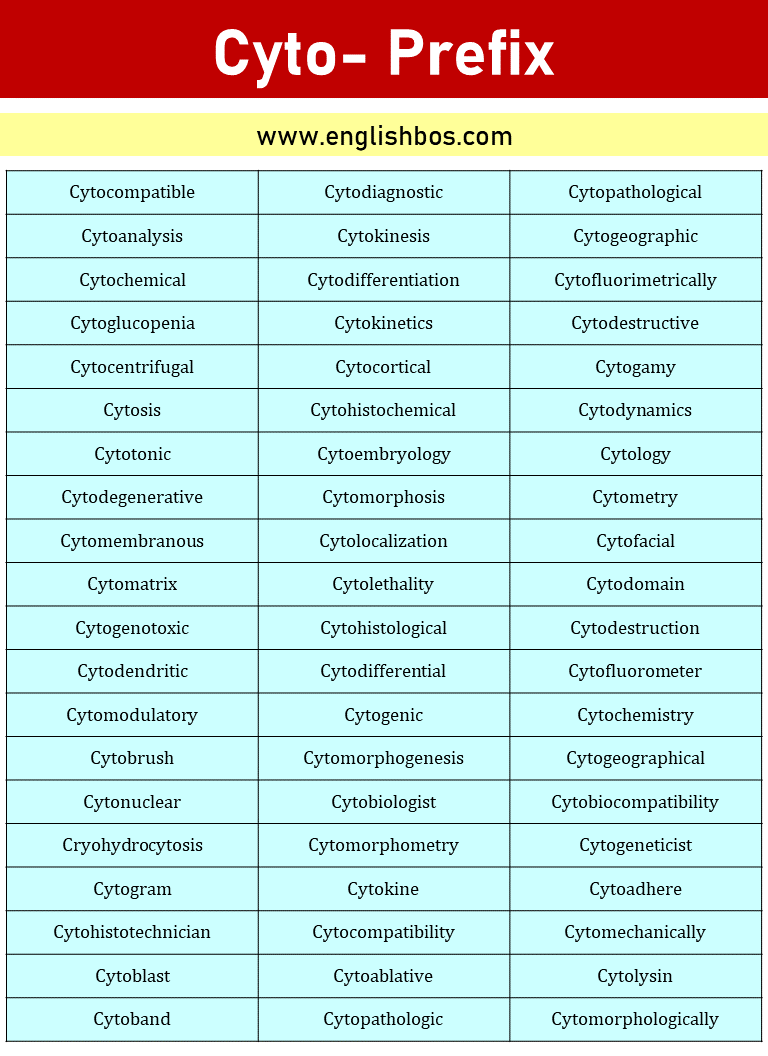 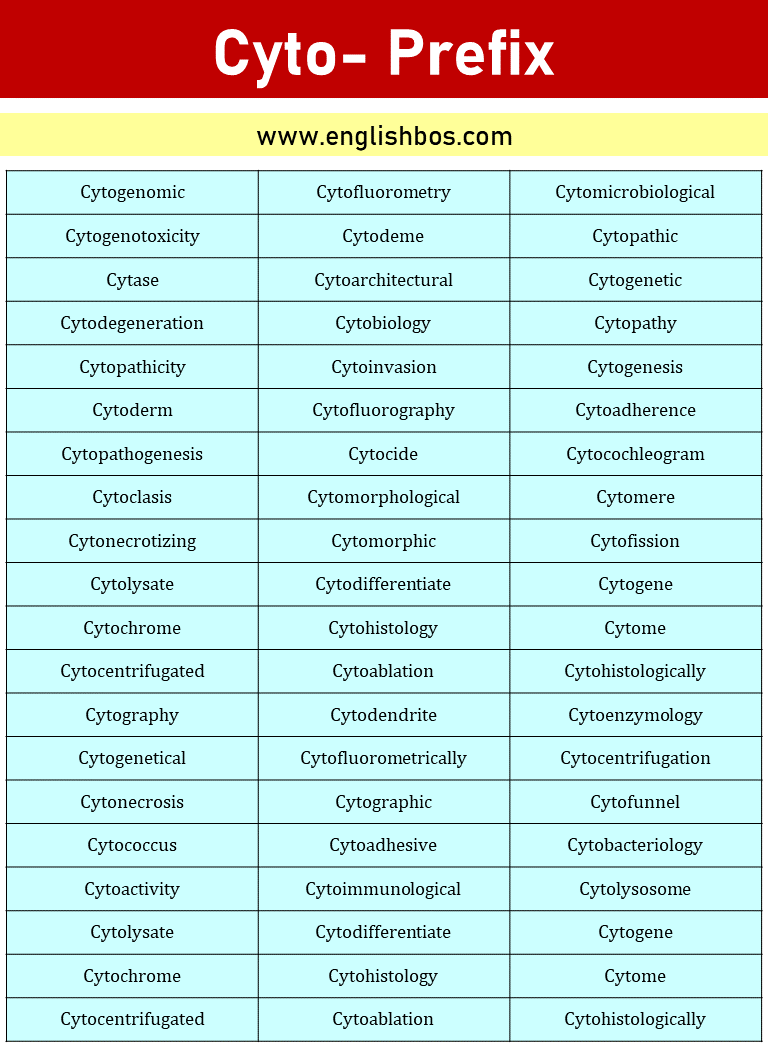